Oliver Webb returned to the world of GT racing recently to take part in the FIA GT Series finale around the streets of the Azerbaijan capital for the Baku City Challenge, before confirming further GT plans which will see him contest the Dunlop 24H Dubai early in 2014.

Up for the challenge on the streets of Baku

The headline event of the 2013 championship saw the young British driver at the wheel of the Fortec Motorsport Mercedes-Benz SLS AMG GT3, showing strong pace among a grid of some of motorsport’s biggest names, but his challenge was ended prematurely in the weekend’s main race.

The first experience of the Mercedes for the BRDC driver on the city’s roads was a police escorted parade with the full grid of nearly 30 cars in front of the local race fans. From here, Webb made his competitive debut on the challenging city street circuit with teammate Benji Hetherington, and showed early promise. As the team worked on the car set up throughout the initial practice sessions, Webb’s number 18 SLS AMG GT3 was running firmly in the top 10.

A highly competitive and action-packed qualifying session saw Webb pushing hard around the tight 4.380 km circuit, but the driver pairing was unable to match the pace they had shown earlier in the weekend. As the session ended, Webb and Hetherington secured P18 for the first race of the weekend.

The Qualifying Race saw its fair share of action and, after a strong start, was moving through the field. A strong performance by both drivers saw the pairing gain positions on track, and Webb brought the Fortec Mercedes home in P15, which would be the starting position for the weekend’s main race, and would see the Knutsford-born racer line up alongside French rally ace, Sébastien Loeb, who made the switch to GT racing this season.

Webb started the second race of the weekend, getting away strongly, and immediately looking to capitalise. Quick reactions and strong racecraft saw the 22-year old Brit move quickly up to P12, but his charge was brought to a premature end after debris from an incident ahead caused significant damage. Despite the best efforts to continue, Webb was forced to retire from the race, bringing an early exit to a closely fought race, which saw a prolonged safety car period and countless bold overtaking moves. 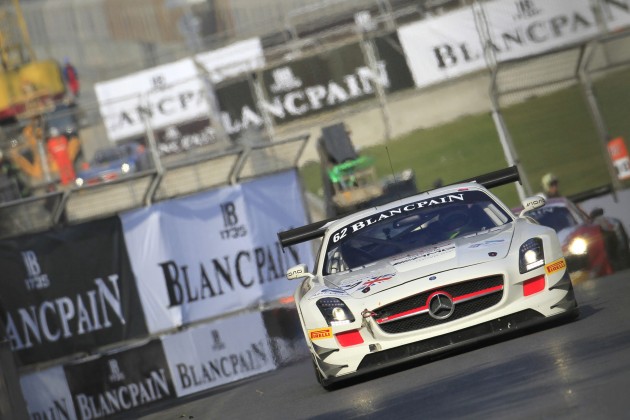 Despite this premature end to the weekend, Webb was positive about the performance, commenting: ‘What a fantastic experience! This was my first time to Azerbaijan, and it was great to be part of the Fortec Motorsport team for the season finale around the Baku streets. The circuit is quite challenging, but it was a new track for all drivers, and we showed good pace throughout the weekend. It’s a shame we weren’t able to bring the car home in the second race, but these things happen in racing, especially on a street circuit.’

Webb will return to the GT grid early in the New Year following confirmation that he will contest the Dunlop 24H Dubai with Leipert Motorsport, at the wheel of a Lamborghini Gallardo. The race takes place 9-11 January 2014.

‘I am really excited to be joining Leipert Motorsport for the Dubai 24 hour race,’ explained Webb. ‘It is a fantastic opportunity, and will be great way to start the New Year. I competed in my first 24 hour GT race earlier this year at Spa-Francorchamps, which was a completely new challenge, but I really enjoyed it and am feeling confident. The team has a strong record at the Dubai Autodrome, and I am looking forward to working with them, and driving the Lamborghini Gallardo – a car I have had some close battles with during this season.’