British racing driver Oliver Webb has returned from winter training in Dubai as he continues preparations for what is shaping up to being a busy year.  Following his impressive debut last year, Webb will contest the full Firestone Indy Lights Championship calendar which has now been confirmed for 2012.

The 12-race calendar visits legendary circuits around the USA and Canada, supporting a number of the IZOD IndyCar Series meetings, and includes temporary street courses, permanent road tracks and challenging ovals. For the tenth year, the championship gets underway in Florida and 20-year old Webb will make his first full-season debut on the streets of St Petersburg over the weekend 24-25 March.

Eight circuits that hosted Firestone Indy Lights races in 2011 return, with two of the three circuits Webb already has experience of confirmed for the new season. In July, Webb will return to the Edmonton Airport circuit where he made his Indy Lights debut in 2011, securing third place, before heading back to the Baltimore street circuit over the first weekend of September.

Ahead of the season opening race, Webb will take part in the full testing programme on a variety of circuits around the USA with SSM throughout February.

Commenting ahead of his move to the US, Webb explained: “This year is looking more and more exciting, and I have been working hard over the winter so I can hit the ground running as soon as I arrive in America. From the initial experiences I had last year, it was clear that the Firestone Indy Lights Championship is extremely competitive and I want to make sure I am in the best shape possible for the first race in St Petersburg.’

Alongside his competitive commitments in the USA, Webb will also continue to be involved with the testing and development of the British BAC Mono supercar. As a BRDC Superstar driver, the young Brit will also continue to have links with the British Racing Drivers Club as well as working closely with the children’s charity Starlight. Webb Will be on main stage at the Autosports Show, NEC, Birmingham on Friday 13th, 3pm as well as competing in the Charity Celebrity kart race. 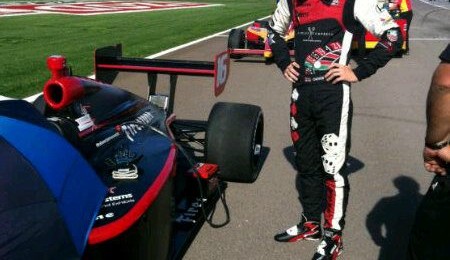 One event TBA which should run alongside the 16th IndyCar event.