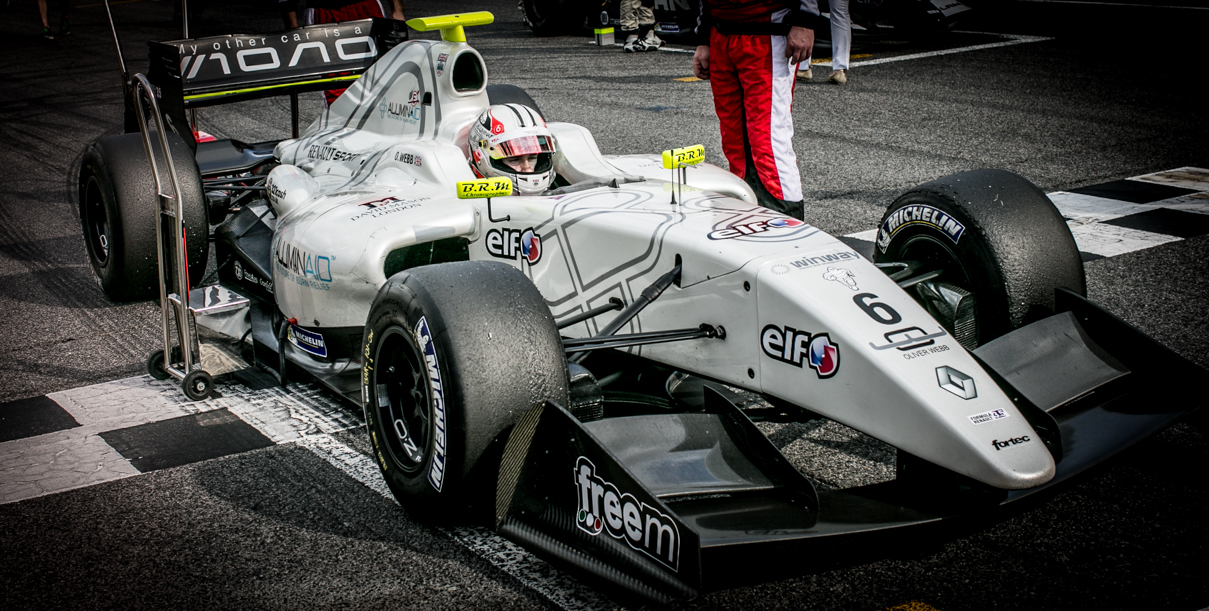 Webb had shown strong pace during the season’s testing session earlier in the year at the Spanish circuit, and the young Englishman completed the weekend’s practice sessions with good pace, concentrating on race set up. Despite this early pace, an engine change and throttle issues saw Webb struggle during the weekend’s first qualifying around the 4.655 km circuit and saw him in P18 as the session concluded.

Another strong start away from the grid saw the 22-year old Knutsford-born racer move through the field approaching the first corner, but was forced to take to the grass on the outside of the corner to avoid a three car incident. Webb worked hard to close down the leading pack, and with the new engine and set up working well, moved up into the top 10, claiming the final points position as the chequered flag fell.

After a delayed second qualifying, Webb took to the track for his first run, using old tyres in preparation for a planned quicker run later in the session. However, with the weather worsening, the session was brought to an premature end before he was able to complete a time on fresh rubber, and would start from P12 for the second race of the weekend. Despite this setback, the BRDC driver lined up on the final grid of the season feeling confident in the car and the set up.

This confidence was well-founded, with Webb making another strong start and was quickly chasing down the points-paying positions. A well executed pitstop by the Fortec Motorsport crew saw Webb back out on track still in contention to end the season on a high, and as the laps clicked down he was significantly reducing the gap to the pack ahead. At the line, Webb’s charge had been enough to claim a valuable point for his second 10th place finish of the weekend.

Commenting on the final round of the 2013 World Series by Renault FR3.5 season, Webb explained: ‘It has been a frustrating weekend, as the car felt good after the initial problems we suffered, and we were unlucky in both qualifying sessions. However, the race pace was good, and I am pleased that I could score points in both races – that’s a good way to end the season.

‘Congratulations to Stoffel (Vandoorne) for claiming second place in the championship in his rookie year. And I would also like to thank the guys at Fortec Motorsport, for giving us such a competitive package this year to push for points finishes and secure P2 in the standings.’

Webb will return to the track in the cockpit of the Mercedes-Benz SLS AMG GT3 of Fortec Motorsport for the Baku City Challenge in Azerbaijan, taking place 22-24 November. He will also continue his development work with British sportscar maker, BAC over the winter months.