PODIUM FOR WEBB AND ALPINE IN IMOLA

Podium for Webb and Alpine in Imola

British racing driver Oliver Webb travelled to Italy with the Signatech-Alpine for the second round of the European Endurance Championship, and secured a podium finish at the Autodromo Imola. Building on the strong start to the season at Silverstone last month, Webb and the team showed strong pace throughout the four hour endurance race and secured third place. 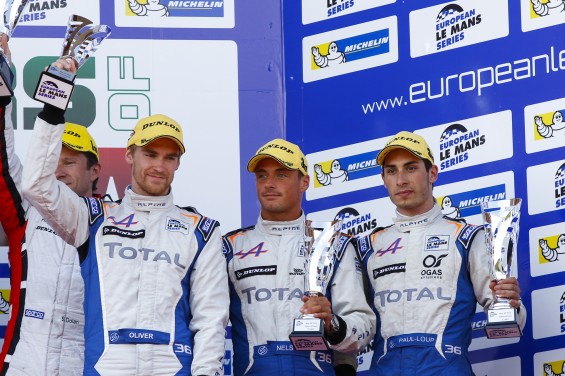 In a change from the season-opening round, the team has switched to run on Dunlop tyres for the remainder of the season from Michelin tyres , so early running was key to understanding and optimising the setup for the weekend. Despite this change, Webb and his team-mates Nelson Panciatici and Paul-Loup Chatin were immediately on the pace in every session, and finished the testing day in P1 ahead of the field.

With a strong set up, and a clearer understanding of the tyres, the Signatech-Alpine team ran well throughout qualifying around the 4.909 km circuit, which favours a high downforce configuration. At the end of the session, the French team head secured third place for the four-hour endurance race. A tough fight with the Jota team whos high downforce set up benefits greatly for them in qualifying.

Webb’s team-mate Nelson Panciatici started the race well, and had moved in to second place when he handed over to Paul-Loup Chatin. More strong running in 2nd place was slowed when the #36 Nissan-powered Alpine A450 LM P2 prototype was forced to pit ahead of schedule due to a slow puncture, which saw Webb take over driving responsibilities. However, a problem getting the car restarted meant precious time in the form of 20 seconds was lost in the pits. Despite this setback, Webb quickly recovered the lost time, and posted consistently quickest lap times on track, and caught the lead car, and took the lead prior to the end of his stint with a daring 3 wide move around a GT car with Jota for the lead of the race.

Before Webb returned to the pits, a safety car period brought the field pulled the field back together, undoing all of the hard work Webb had put in, and neutralised the lead he had built up. This required a change to the team’s strategy, ultimately costing them a possible win. On the restart, Webb pulled out a 20 second lead in just a few laps, pitting for a driver change due to strategy a few laps later.

Chatin continued to produce strong lap times in the closing stages and, although unable to defend the lead, as the chequered flag dropped at the end of the four hours, Signatech-Alpine secured the first podium finish of the season with a hard-fought third place to move them up to third in the championship standings.

Commenting on the race, Webb explained: ‘We made significant progress this weekend, and I am really pleased to be on the podium with Nelson and Paul-Loup. The team has done a fantastic job with the car, especially with the challenges of switching to a new tyre for this weekend, but we were immediately on the pace, and I’m really proud to have been able to get a strong result here. We are moving in the right direction, and we will keep pushing and hopefully score more podium finishes and I am confident we will be on the top step very soon.’

Round Three of the European Endurance Championship will see Webb and the Signatech-Alpine team at the Red Bull Ring, Austria, over the weekend 19-20 July.