Double points finish for Webb at season opener in Monza

Double points finish for Webb at season opener in Monza 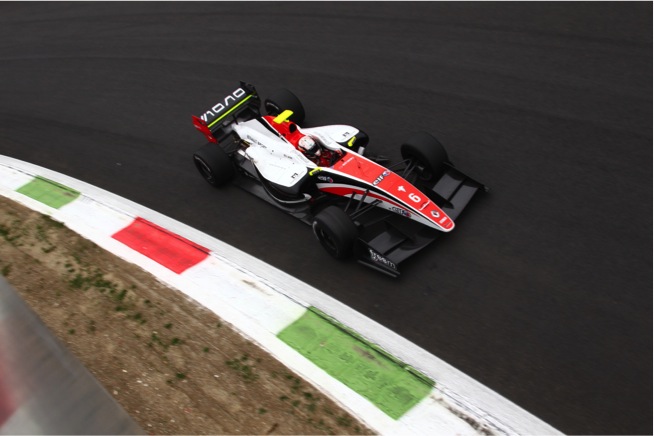 British racing driver Oliver Webb got his 2013 season off to a strong start on the famous Italian circuit of Monza, scoring points in both races for Fortec Motorsports and narrowly missed out on a podium position on his return to the World Series by Renault FR3.5 championship. The racer, who recently celebrated his 22nd birthday, claimed a hard-fought fourth place in race 1, to help the team score its highest points haul in the championship to date, followed by ninth place in race 2.

Unsettled weather over the weekend saw free practice sessions run in both dry and wet conditions, and qualifying 1 saw Webb start the session on wet tyres, running as high as P2 as the track started to dry out. A bold switch to slick tyres as time ran down proved slightly too early, and he was unable to improve his time further, and ended the session P10.

Starting from the fifth row on the grid, BRDC driver Webb made an aggressive start as the lights went green to move his way through the field, and was quickly up to sixth. From here, he settled in to a rhythm, and worked on closing the gap to the pack ahead, being quick to capitalise on the opportunity when two battling cars ahead came together. In the closing phase of the race he worked on reducing the gap to the final podium position, and opened up a lead over the chasing pack. Despite battling hard all the way to the chequered flag, he claimed fourth place, with teammate Stoffel Vandoorne taking overall victory for Fortec Motorsports.

Extremely wet conditions for the weekend’s second qualifying session saw Webb push hard but, in tricky conditions, the young Knutsford-born driver would end the session in P11. Another strong start saw Webb again make up positions off the grid, and a bold move saw him in fifth place by the exit of turn 1. He continued to battle for the remainder of the race and was in sixth place going into the final lap, having built a large gap to the chasing pack. However, a puncture with two corners remaining, including the high speed Curva Parabolica, saw him do well to maintain control, and nurse the car home to claim ninth.

With a double-points finish, Webb completed a solid weekend in the season opener for Fortec Motorsports and is sixth in the championship. ‘We had a strong pre-season test programme, and I was feeling confident and excited to get back into the car for the start of the season. It’s great to be racing back in Europe, and it was great for me to score points in both races. I’d also like to add my congratulations for Stoffel on his victory.

‘Overall, it was a really good first weekend, and great results for the team. It was unfortunate to end with a puncture, which lost me a few positions, but there are a lot of positives to take from the weekend, the balance of the car felt good, and I am really looking forward to getting to Motorland to try and challenge for a podium.’

Webb now returns to the UK to continue his development work with the British single-seat BAC Mono supercar, along with training and further simulator work as he prepares for Round 2 of the World Series by Renault FR3.5 championship at Motorland, Aragon over the weekend of 27-28 April.